Place is a joke, one table at best, waiting is too long, too much bad attitude there with owner and management staff and even some of the regulars, guessing they were regulars the way the dealers were talking to them, some of the younger dealers seems to be more professional than the older ones, too much bad language and even the employees are getting yelled at for all to hear, the regulars are ganging up on the new players and that older female dealer seems to be in on it or just laughing about it, she has a bad attitude and a filthy mouth, I don't see how they stay in business, Go play there two or three times and see for yourself, I played there six times, three during the early days and three during the late nights only because its close to where I live, Big waste of time and energy, Only good thing that came out of it was I'm ahead $943.00 there. Still not going back!!!

ABBY J CARD HOUSE HAS BEEN SOLD AND WILL BE UNDER NEW OWNERSHIP BUT UNDER THE SAME GREAT MANAGEMENT ( BRITTANY )!! WE WILL BE CLOSED FOR THE HOLIDAYS FROM DECEMBER 19TH UNTIL JANUARY 2ND.THE CARD HOUSE WILL REOPEN @10AM ON JANUARY 3RD WITH A NEW NAME, NEW OWNERS AND EXCITING NEW PROMOTIONS. SCOTT WOULD LIKE TO THANK EVERYONE FROM THE ABBY J FAMILY FOR THEIR SUPPORT DURING THE PAST 5 YEARS AND WISHES EVERYONE GOOD CARDS IN THE FUTURE. MERRY CHRISTMAS AND HAPPY NEW YEAR WITH LOVE AND RESPECT, SCOTT 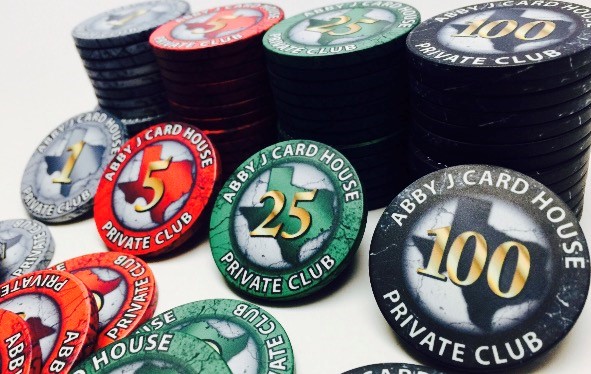 Been coming here to play for a few years now and the atmosphere and customer service is great!! Always a good time... Read More

Peaceful place to enjoy a great game of poker without Drama!! Everyone is extremely nice and inviting, my new... Read More

My first time here and it was a great spot. Enjoyed the table, great competitors, and a very friendly staff! Will... Read More

Great place to play. Very nice atmosphere! The owner Scott and his staff go out of the way to make you feel... Read More

This card house is a great place to play poker. The dealers are courteous, the players who are regulars are friendly,... Read More

Abby J's card house over the weekend had a great session playing poker staff dealers and everybody were professional... Read More

Place is a joke, one table at best, waiting is too long, too much bad attitude there with owner and management... Read More

Abby J's Card House is a very clean club with much to offer. Daily High Hands and a Progressive Bad Beat at over... Read More

Do not play here

The owner sits at the table(playing) and basically narrates the game and tells everyone what to do. The owner tells... Read More

The bad beat is a joke. Have to be a member for 30 days prior to hitting it, might be the dumbest thing I have read.... Read More

No action period. I stopped going because everytime I tried only enough players for one table. Owner and staff need... Read More

The atmosphere is great, and the action is solid. I particularly like the weekends when the games are on the big... Read More

My buddies tried this card house for a tournament. I called the owner out because he is falsely advertising a... Read More

Action was garbage. They weren't playing poker they were playing lets flip a coin. People going all in for $100+ with... Read More

Great staff, huge tables, very comfortable. Great location too! Been to all the other rooms in town but really... Read More

I work here so "off suit" I'll tell you this is a great place to play poker. Clean quiet location with plenty of... Read More

I haven't been to many Cars Rooms, but Abby J's is my third and this Card House is the best I've experienced yet!!... Read More

Great place to play real poker, Scott the owner is a very respectable man and is willing to help in anyway possible... Read More

This is a great place to play poker, great regulars that are fun and professional. Nice set up, friendly staff,... Read More